The castle of Azay-le-Rideau is built on an island in the middle of the Indre during the reign of François Ier. A subtle alliance of French traditions and innovative decorations from Italy, it is an icon of the new art of building in the Loire Valley in the XNUMXth century.

Experience a visit that will immerse you in the incredible history of one of the most beautiful castles in Touraine. Often referred to as the most harmonious architectural jewel in the Loire Valley, the Château d'Azay-le-Rideau deserves this nickname so much, it shines with its elegance and architecture.

A perfect alliance of French tradition and innovative decorations from Italy during the Renaissance, the Château d'Azay-le-Rideau is the symbol of a new way of building castles in the XNUMXth century.

Located in the heart of Touraine, the castle was built at the beginning of the 1518th century (between 1524 and XNUMX) on an island in the middle of the Indre, known and recognized worldwide for its elegance and its reflection in the reflecting pool. which surrounds it…

A little bit of history

You should first take a little leap into the past before fully enjoying it!

The estate was bought at the beginning of the XNUMXth century by Gilles Berthelot, treasurer of King François I, who had a house built, which he inscribed in modernity by imposing the aesthetics of the Italian Renaissance. In particular, he built the sublime straight staircase, one of the very first installed in the Kingdom of France (through which you will enter the castle)!

Struck with disgrace by the king, Gilles Berthelot leaves his castle unfinished. François I then seized the house and offered it to one of his faithful, Antoine Raffin, before it then passed into the hands of the Gelais de Lansac family. The castle then saw a prosperous period, marked by the stay of King Louis XIII on June 27, 1617. The end of the 1684th century was complex and the monument fell into disrepair after the death of the Marquis de Vassé in XNUMX ...

If Honoré de Balzac compared the Château d'Azay-le-Rideau to “a faceted cut diamond set by the Indre”, it is because this residence dazzles with its luminous splendor. Its reflecting pool is itself flattered by the reflection of its delicate shapes and the grace of its Renaissance architecture. This jewel of a castle bathes in the romantic atmosphere of a landscaped park, rocked by the waters of the Indre and the whisper of the wind in the foliage of its large trees. Renovated and maintained with care, the Château d'Azay-le-Rideau offers you tender moments of poetry.

It was not until 1791 and its acquisition by Charles de Biencourt that the Château d'Azay-le-Rideau was reborn. The Biencourt family undertook major works which gave the château its current appearance. The Marquis de Biencourt also landscaped the park and a sublime English garden.

The owners of the castle:

A dreamlike and unique tour!

Along the main staircase, you will discover the Biencourt family apartments on the ground floor, but also the attic, open since 2011 to visitors which allow you to admire the exceptional frames of the castle, just restored. .

A new route awaits you on the first floor of the castle, with "Les enchantements d'Azay". Two artists (Piet.sO and Peter Keen) will present six contemporary art installations, drawing on the imagination of the Renaissance, to be discovered from July 6, 2017.

The visit continues in the romantic park imagined by the Biencourt family in the 2014th century and restored in XNUMX. The walk around the castle has been redeveloped and the park now extends to the Ile de la Rémonière, a remarkable natural site accessible by a bridge.

An innovative and connected visit

To make your visit ever more fun and interactive, new digital tools are available such as an interactive multimedia table… Your teenagers will love it and so will you!

The castle is undoubtedly a monument to be discovered together with "the meetings of families". On the program: during the school holidays, thematic activities, treasure hunts, workshops and theatrical visits, enough to have a good time with the family and learn in having fun. An illustrated booklet is given to children free of charge at reception. It offers games, focus and funny comments with Sally, the salamander as a guide (from 7 years old). An audioguide suitable for children is also available (Price: € 3) for a fun discovery in the company of Gédéon, the dragon! 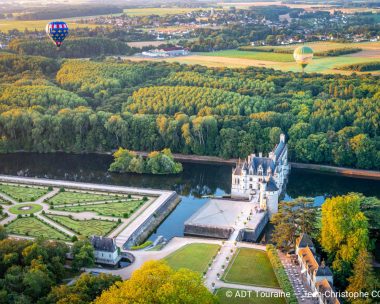 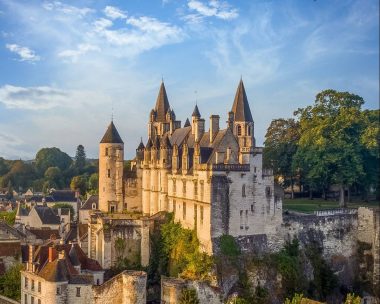 Loches, city of art and history